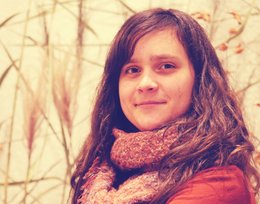 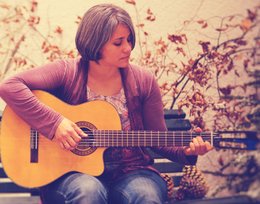 One of Sable’s fondest memories growing up was gathering around her mother playing the piano and singing as her father and brothers were playing trombone and saxophone. Even from a young age, singing was a huge part of her life.

As she grew, there was no greater desire than for Sable than to play the harp and write songs like King David. Sable often Looked up to her oldest brother, who wrote biblical raps. He would continue to encourage her to sing the songs that she would make  up. Throughout her High school years, Sable's favorite subjects--beyond English and Science--were Choir and Band. She constantly enjoyed pestering her middle brother,  dragging him into singing the bass line with her for special music at their home church. Sable continued to teach herself how to play the harp, which was no easy feat. One summer she even had the opportunity to work at the local music shop, which gave her a greater appreciation for how musical instruments were made.

Songwriting first became very prominent, when she took two years off from College to volunteer at a school in Austria.  With very little background in the language and culture, Sable learned the importance of prayer and clung to many of the promises found in scripture. It was through this experience that Sable began writing songs based on Biblical passages that she could relate to in her own experiences. During her time in Austria, Sable reconnected with her Aunt who also helped her refine her song writing abilities.

In the end, it is Sable's hope and deepest desire to share with others through her own journey of faith and struggles, to help them focus on the promise of Jesus’ second coming. Sable looks forward to the challenges and joys of songwriting for future albums, seeing how God will teach her important lessons through the process and applying them in  her own life as well.

Wendy started singing with her six siblings at church. Often it was a family affair with mother on the piano and father directing. Her first songs were rough to say the least, with titles such as "yellow mellow on the telephone" or "super, super, super man." She never thought of taking   her songwriting to the next level at that age. Most of the time she dreaded family choir practices and even worse, practicing the piano! She infinitely preferred playing in the great outdoors (or anywhere else that was far away from the piano!) By her midteens, her musical endeavors were chalked up to highschool choirs, rewriting funny lyrics to cover songs and tinkering sporadically on the piano.

By her twenties, Wendy had played around with songwriting in group settings on occassion, but did not really think twice about it. It wasn't until she experienced a midtwenties crisis that her musical abilities took on a whole new and personally deeper meaning. While in a deep depression, Wendy's mother--out of quiet desperation of seeing her daughter in such a state--challenged Wendy to take up a new instrument: the guitar. Wendy took up the challenge with a prayer: if God would help her learn this instrument it would be only to praise His name. Within a month of beginning the painstaking process, she composed her first song for her future husband. As Wendy continued to play, inspiration often struck through experiences in realtime, becoming a personal outlet and musical diary for her. As others began to hear snippets of her songs, Wendy was asked more and more to share among others. But one weekend geared for budding songwriters and singers almost crushed out any desire for Wendy to continue. God helped her to overcome this frustrating experience and  filled her with a more  purposeful resolve to remain as independent and off the beaten path of a songwriter as possible.

By this time a new phase entered when she met and began composing songs with fellow singer/songwriter Jessica Shine, writing many songs together but not having a chance to make a decent recording of them. After relocating overseas due to her husbands work, Wendy met and later became a part of onething through a series of unexpected events, performing their first concerts with a recording sandwiched between. The group officially formed in 2007 under the most unconventional group setup who over the years have performed a handful of concerts and have one CD to date. Wendy has  been slowly working towards writing another album, with a specific theme in mind set up by the group. Meanwhile she is a mother of two precious but energetic boys! Currently she and her family are working in a Latin American country.  Wendy continues to write songs for her boys, for baptisms, for weddings, for weekly encouragement messages and for  all manner of life experiences,  sharing them to be a  blessings for others.