To read about other band members, click on the  "page 3" 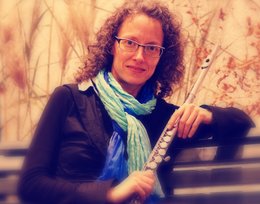 Mira loved music from a young age. As a child she began learning to play the recorder with her brother and truly enjoyed the instrument. Often as they grew in their musical abilities, Mira and her brother would play special musical pieces for church. As a teenager, Mira began piano lessons and then Flute.  She was able to gain exposure to other instruments as well, including guitar and harp. However, her passion for flute began to flourish.

While receiving her music lessons at a music school, Mira was able to gain experiences that would not have been nearly possible through a private teacher. She began to play in ensembles and orchestras and having opportunities to perform solo pieces. Playing within these parameters gave her much joy and increased her passion for music and performance. Later as the opportunity arose to be one of the founding members of One Thing, she was able to experience placing her musical abilities in a wonderful way to share God's love.

Today, Mira's greatest hobby and focus has become her family. Her days are often filled in a home shared with a loving husband and a beautiful boy. Her love of music has deepened as she continues to share this appreciation and passion for sharing Christ through music with her little one as well as her local church, and with One Thing.

Tessi grew up surrounded by music played or sung by her four older siblings and her parents. Her day began with singing in the early morning for family worship, which (her singing) usually continued to intertwine with almost every other activity throughout the day, including eating. Often two of Tessi's older brothers would perform, singing and playing the piano together. This became an incentive for  6 year old Tessi after two years of early music education to follow in her brother's footsteps--which meant learning the very same pieces her brothers played in order to challenge herself and them.

As a teenager, Tessi's interest in music began to wane, that is until her school teacher asked her to play the piano in the school orchestra. Through this new experience and challenge, her love for practicing her favorite instrument sparked once more. As she continued to develop her musical abilities in this setting, her desire for more increased and led her to enter a conservatory in order to dedicate more time and challenge for improving her piano abilities such as reading, improvisation and performance. The piano however is rivaled by two other passions: Math and Spanish.

Tessi thoroughly enjoys the thrill of solo performances, however she has found a great passion in working in a group setting--especially when there is a strong Christian focus and purpose. For this reason when Tessi was approached to be a part of One Thing, she couldn't resist. The experience of collaborating together  has been a tremendous experience and blessing for her personally. It is also Tessi's greatest hope that the blessing she experienced will overflow through the music and be as great of a blessing for others as it has been for her.